I have writerly things to say.

And then I go and write.

By the time I'm finished, I don't want to write about writing.

It's kind of a merry-go-round. Or something.

We drove from this... 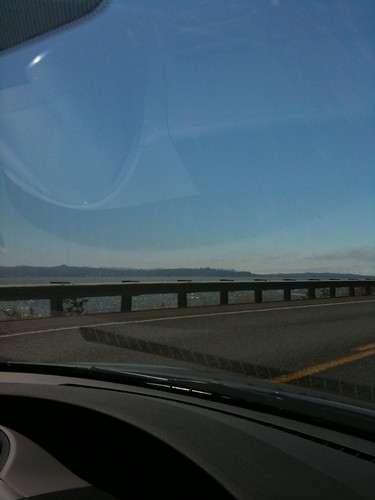 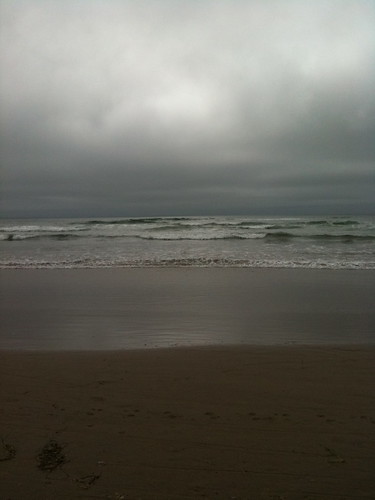 Overcast, cool, and not at all what I was thinking of when going to the beach. I'd had a brain fart and forgot where I lived. Summers here are not like the summers of my younger days, but my head keeps forgetting that and tells my body that summer = HOT. I think it'll probably be another 30 years before my brain wises up and gets the message. I wished I'd brought jeans and a couple of fleeces.

But all in all, a nice relaxing vacation. We beat the heat, the Prez's visit (which included sonic boom by F16s checking out someone who flew too close to Air Force 1), and are now in the home stretch before the beginning of school.

Instead of lump crab mixed with egg, scallions, red pepper and Old Bay seasoning (which overpowers every other flavor imho), I just mixed the crab with a little less than 1/2 c of mayo, some lemon juice (I didn't measure, but it might have been less than a 1/4 cup but more than two Tablespoons), ground black pepper, one egg, a dash of Old Bay (and I really mean a dash), and bread crumbs.

Mixture was reeeeaaally soupy. Hrmity. I pressed on by dumping a little less than 1/3 cup of crab mix onto plate with breadcrumbs. Alton suggests panko, which I was missing (and will get this week because YUM), but regular ole' bread crumbs worked fine.

The "ball" of crab was fine when pressed lightly in my cupped hands. I patted a little more breadcrumb around the mix and then gently set it on a plate. Made about 4 small-ish lumps. Chilled in fridge for a couple of hours, which made a HUGE difference in the texture. They came out of the fridge much much firmer than when they went in, so they fried up just fine in veggie oil heated on medium heat. We used a non-stick pan just cos.

This recipe is great. Very crabby. Not overpowered with onion or Old Bay or butter/oil like some recipes. I like eating crab cakes with arugula salad or just the greens by itself. I might one day get around to making a french potato salad or something. We ended up having a cucumber salad of sliced cukes in asian vinegar with seaweed, although I discovered that our vinegar was not the seasoned kind that takes the bite out of this salad (I did add sugar and salt to the mix, but it was still too tart).

I should have taken a photo, but I never think of these things until it's too late.

I Write Like by Mémoires, Mac journal software. Analyze your writing!

Suffering from cold and allergies is no fun. I'm coughing and wheezing and trying to decide which is worse--itchy eyes, sneezing and clogged sinuses or clogged sinuses, cough and post-nasal drip. I can't take both cold and allergy meds because my brain would be sucked dry faster than a peach in the desert (both have decongestants). I may have a slight bronchial infection, but I'm waiting it out to see how bad it is. Every time I take a deep breath to talk, I start to cough. I can talk with my head voice but not from my diaphram, which is my normal go-to. So, it's hard to have a conversation.

* finished knitting socks. They are too big in the ankle, but I can adjust. Started sock for N, got nearly to toes and realized I cast on too few stitches. Frogged the whole thing and started over.

* Granny G came to visit for boy's b-day. I almost finished the whole new sock during visit. Boy is now much more a boy-boy complete with fart jokes, body antics only a boy can love, crazy in-motion stuff that baffles me, and other stuff of normal boydom. I'm still gobsmacked by how much time has passed since the insufferable days of nothing-happening-monotony. Three months seems like forever when all you have is the routine of feedthebabychangethebabyfeedthebabychangethebaby. We had outdoor park-party which pleased all the attending boy-guests. They ran around and seemed to have a lot of fun even when there wasn't much planned in the way of "organized" activities. I don't understand the Martha Stewart suggestions for kid parties. Most kids would be perfectly fine left to their own devices with food, candy, cake, and gentle parental supervision. They can make up their own games just fine.

* I read books. Scott Westerfeld's LEVIATHAN was entertaining. Short, naturally. It's aimed at the younger audience, so was short and sweet. I liked the world and both the mech-tech and the biotech. I wished it was longer and not stretched to another book, but that's just me. Characters were strong and believable and the best thing I liked about it was the subtle way he wove in history, tech, and story without it feeling like I was being clubbed over the head.

I picked up Glen Cook's old series THE BLACK COMPANY, which is military-fantasy from way back. I got the omnibus, which contains the first three books in the series. The Black Company is a group of mercs who get out of one contract just before the craphitsthefan and finds themselves working for an ancient evil who is again trying to take over the world. Except she's not the worst of the resurrected evils. It's entertaining, moves along with sprightly action, and is fantasy-lite. It's never gets bogged down in too much worldbuilding, backstory, character arc and backstory, and feelings. This is a book for guys. Lots of guys DOING STUFF. I appreciated the non-gratuitous nature of the story (there is the typical rape and pillaging--they are mercs and not the Justice League) and the main characters seem above that sort of thing either by choice or because they have too much other stuff going on. The story never gets down into the depths of what it could have been, which could have been its saving grace. The main characters keep moving on to their inevitable conclusion even when I wish Cook would have delved more into one area or another. From a writer's perspective, it was an interesting read to see how action was done in a sweeping manner without the gratuitous gore factor, to see how sympathetic characters are made without going into minutiae, and realize this was a series for Guys in the same way all that paranormal-lite stuff appeals to the ladies.

* I also read books on knitting and other crafts which is probably only interesting to me... and maybe other knitters/crafters. I also bought books on the American West because I realize I needed pictures and phrases and such for my own personal backburner.

* Progress on the novel goes along. Trying not to make it overcomplicated is a lot more work than I thought. Feeling intimidated and bolstered at the same time. Ripping out and reworking to get voice is frustrating but educational. Skill isn't quite up to expectation; always striving for more.

* Off to see "How to Train a Dragon" with boys later today. Dragons and Vikings. W00t!

I still have to add links, widgets, and a banner image that I'm creating.

Add it to your feeds/bookmarks. I promise to add content on a regular basis.

Afterall, my otter-like tendencies to just run off and play with the shiny can still be used for good. Right? RIGHT?

It would have been adequately enjoyable as a cartoon on Saturday morning. It even had a moment of mwhahahaha from the evil villain, who ends up calling himself the Commander. With plenty of villainous monologuing.

In some ways, I would have enjoyed the movie more if the villain had actually laughed more with maniacal glee. Instead, we don't really get to see the eeeevil geeenius until the last 1/4 of the movie, and by then, the revelation doesn't matter. The impact is lost in the midst of "meh".

Too bad. I loved seeing the Joes kick Cobra's butt every Saturday morning. I still think Snake Eyes is the best character, but that's just cos I like ninjas. And the fact that the good ninja wore black while the bad ninja wore white. Cheezy, but awesome!

What's up next:
Masters of the Universe (He-Man)
Thundercats
Smurfs

Any more I missed?
Collapse